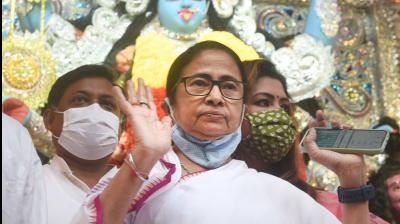 Hyderabad, Kolkata: Trinamul Congress president and West Bengal Chief Minister Mamata Banerjee on Saturday invited leaders of twenty-two non-BJP events together with the Congress, Left and Chief Minister Okay. Chandrashekar Rao of the TRS, to a gathering in Delhi on June 15  to debate the fielding of a joint candidate in opposition to the BJP-led NDA for the July 18 Presidential election.

She mentioned the try was to construct a “sturdy and efficient opposition in opposition to the divisive forces.” The deadline to file nominations for the election is june 29.

All eyes had been on whether or not Chandrashekar Rao, who’s making his personal makes an attempt to unite non-Congress events to place up a joint candidate, would attend the assembly or not as Banerjee had invited Congress chief Sonia Gandhi as properly.

The TRS maintained silence on Banerjee’s letter on Saturday. A celebration’s Lok Sabha member mentioned, “There are 4 extra days to go for Mamata’s assembly. The CM will take a name on whether or not to attend the assembly or not by June 14.”

TRS sources mentioned Rao was of the agency opinion that the TRS mustn’t help a candidate proposed or fielded by the Congress-led UPA. He was in favour of regional events fielding a joint candidate and had no objection if the Congress supported the nominee.

Because the Congress is the principal opposition for the TRS, sources mentioned, Rao was not eager on attending any political assembly which might be attended by prime Congress leaders.

Rao’s newest speak of launching a nationwide occasion of his personal in opposition to the Congress and the BJP, nevertheless, is being considered as a sign that he had misplaced hope of convincing regional events to come back collectively. That additionally forged a shadow of doubt over Rao’s participation in Banerjee’s assembly.

Banerjee wrote to the invitees individually: “A nation with a strong democratic character requires a powerful and efficient opposition. All progressive forces on this nation want to stay aligned and resist the divisive pressure that’s plaguing us at the moment. Opposition leaders are being intentionally focused by completely different Central businesses, the nation’s picture is maligned internationally and bitter dissensions are created inside. It’s time we strengthen our resistance.”

She noticed, “The Presidential elections are across the nook, presenting the proper alternative for all progressive opposition events to reconvene and deliberate on the longer term course of Indian politics. The election is monumental as a result of it offers legislators the chance to take part in deciding the Head of our State who’s the custodian of our democracy.”